It’s funny how entering into a close relationship with another person can open up your eyes to how privilege works in action.  Becoming a witness to someone else’s daily life and observing their interactions with other people inevitably introduces an element of comparison.  So as a black woman, dating a white man was a complete revelation for me.

I love my partner to pieces. However, throughout our relationship, I’ve noticed a host of differences between myself and him in terms of the privileges we receive.  Whilst these can range from overt to subtle, the main offender, one of the subtlest, and the one that I find to be the most dehumanising to me, relates to the attention he receives.

Before I was in a relationship with my partner, I didn’t really think about being treated differently in social situations because of my ethnicity or gender.  But over the course of our relationship, it started to become glaringly obvious.  With him, other men, on the whole, completely fail to acknowledge my existence.  Their body language opens up to him, their feet point towards him, their eyes hold his gaze and they almost always exclusively address him.  This phenomenon seems to apply almost everywhere, from strangers who stop us in the street to ask for directions to seemingly trivial chats in the college bar about exams.  The fact that they address him directly and entirely ignore my presence has riled me to the point of simply going silent or walking off.

A related difference I came to notice between myself and my partner was just how damn lucky he seemed to be all the time.  ‘I don’t know why, I’m just a really lucky person’ is something he often used to tell me, along with ‘sometimes it’s just a case of being in the right place at the right time’.  Opportunities fall into his lap, left, right and centre, with networking being a breeze, white male supervisors and members of staff offering to mentor him, and people generally seeming to bend over backwards to accommodate his needs.  Beyond these perks are simpler privileges: he gets bought drinks by other guys, gets smiled at by strangers and is given the benefit of the doubt on questionable excuses for missing deadlines.

But the weirdest part of all of this is that, for such a long time, I accepted these perks as having nothing to do with ethnicity or gender, but as simply a result of his high levels of confidence and personability in comparison with my (sometimes painful) shyness, which only seems to amplify in interactions with people in positions of privilege and power.  After all, no one’s going to go out of their way to pull strings for you if you can’t even hold a conversation with them.   And there’s also definitely some truth in the phrase ‘you don’t ask, you don’t get’ – and a lot of the time, he did certainly seem to ask, pushing for more privileges than I would ever dream of.  In bed at night, we’d both speculate on the topic a lot.  When I’d question him on his boldness in asking for what has sometimes looked like special treatment to me, he’s tended to claim that ‘there’s no harm in asking’.  And in many ways, I knew he was right.  So why did I still feel very much like I wasn’t worthy of taking a risk and demanding a little more out of life?

And then it just seemed to click.  Yes, he was confident, and I was shy.  Yes, he was unafraid to ask for perks, whilst I felt undeserving.  But I came to realise that there was something more than that at play here.  And it looked a bit like this: 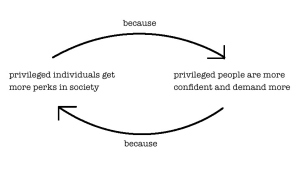 So as time has gone on, amongst all of my anger and confusion, I’ve tried to think more carefully about the way I react to these situations – I want to break the cycle.  Being ignored frustrates me into silence.  But what does this achieve?  If anything, it further decreases my visibility.  So I’ve decided to not be afraid to demand more of people.  While it’s definitely difficult to do, in the future, when ignored, I’m going to try all the more to make myself visible – I will shout louder, speak when not spoken to and outstretch my hand to introduce myself after people stand to shake my partner’s.  I’m not going to allow myself to be ignored and brushed aside anymore.  Although sometimes I’m tired and frustrated and I can’t do this – that’s okay too; it’s fine to have days where you’re too tired to fight the battle.

I definitely think there’s more good to be taken from these realisations than bad.  Whilst nonetheless frustrating, luckily, they haven’t harmed my relationship, as my partner is vigilant as well as supportive, and so notices these differences and works with me to manage these situations when they arise.  I’ve also found that instead of breeding resentment between myself and my partner, these occurrences instead act as daily reminders that white cis male privilege is very much alive and well, which keeps us both engaged in activism and finding methods to combat it.  But beyond this, they’ve taught me that although, due to my ethnicity and gender, people probably aren’t going to be leaping out of their seats to hand me perks in the near future, I can certainly start making some waves by putting myself out there and demanding my fair share.